You are here: Home » About » About Dr. Masterson 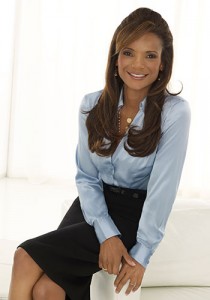 Lisa M. Masterson, M.D. has pioneered the evolution of womenâ€™s healthcare into the 21st century. A specialist in obstetrics, gynecology, infertility, adolescent gynecology and family planning, Dr. Masterson has redefined the role of a gynecologist. She is also the co-host of the Emmy-winning hit syndicated daytime medical talk show, The Doctors, which is currently in its third season. The series is executive produced by Jay McGraw, Dr. Phil McGraw and Carla Pennington.

Dr. Masterson’s unique practice includes a myriad of services not found in todayâ€™s traditional gynecological medicine, paving the way for advancement in her field. Genecology merges with esthetic services at her Ocean Oasis Medical Spa, which offers customized spa treatments as well as exercise and nutrition programs that cater specifically to each phase of a womanâ€™s life.

At the forefront in education, Dr. Masterson holds seminars on adolescent sexuality for teens and parents and has written â€œGo Figureâ€, a workbook for young girls detailing the changes throughout their bodies.

Her reach stretches across borders. Striving to provide global medical relief to underdeveloped regions, Dr. Masterson has created Maternal Fetal Care International (MFCI), a charitable organization dedicated to making every mother and child count around the globe. MFCI brings volunteer physicians to treat needy women and children and provides medical supplies, equipment and training to elevate the standard of medical care and decrease the mother-child transmission of HIV/AIDS. In addition to establishing birthing centers in Kenya and India, Dr. Lisa Masterson co-founded in Eritrea the first OG/GYN residency program in all of sub-Saharan Africa.

Indeed, because of her life-saving work with MFCI, and her contributions to the medical field, Dr. Masterson was honored in 2007 by the Santa Monica Red Cross, received the Golden Rattle Award in 2008 from the March of Dimes, and was honored again in 2009 as a member of the cast of The Doctors by the Santa Monica Red Cross at their annual Red Tie Ball.

Dr. Masterson’s work with MFCI, which is tackling one of the United Nations Millennium Development Goals, earned her the honor of addressing the United Nations Foundationâ€™s Social Good Summit in New York back in September, 2010. In addition, Dr. Masterson has been recruited as a â€œChampionâ€ for the UN Foundationâ€™s Girl Up program, which inspires American teenage girls to help raise money to support health and educational programs that will improve the lives of teenage girls in impoverished areas around the world.

As a child, Dr. Masterson was propelled into fulfilling her dreams and given the strength and tools to make a true mark on the world. Indeed, Dr. Masterson comes from a long line of extraordinary women. Her grandmother, Mattie Ruth Smith, was the eldest of twelve children in Louisiana, whom she helped raise before becoming a schoolteacher in black schools throughout the state. Dr. Mastersonâ€™s mother, La Vâ€™onne, was a professor at the University of Washington and subsequently served in the Office of Housing and Urban Development (HUD). She then moved on to the Equal Employment Opportunity Commission (EEOC), and was offered the directorship of the EEOCâ€™s office in San Diego, where Dr. Masterson attended The Bishopâ€™s School, a well-respected private school in La Jolla.

Upon graduation, Dr. Masterson entered Mount Holyoke College in Massachusetts and went on to Medical School at the University of Southern California. In 1993, during her first year as an Obstetrics and Gynecology intern at USC/County Hospital, Dr. Mastersonâ€™s mother was diagnosed with terminal cancer. A year later, Ms. La Vâ€™onne Smith passed away leaving behind a remarkable legacy.

Dr. Masterson knows, â€œBecause of my motherâ€™s strength and independence as a woman, she was, and is, my governing inspiration. As a private person, she gave us all the encouragement and nourishment a mother could give. As a public figure, she was a major participant in the equal rights movement which has always been foremost in my life.â€

Dr. Masterson has appeared on Dr. Phil, The Oprah Winfrey Show, The Today Show, Oprah After the Show, Good Morning America, CNN Headline News, Anderson Copper 360, The Late Late Show With Craig Ferguson, The Tyra Banks Show, Good Day Live, The Other Half, Berman and Berman, Strictly Sex With Dr. Drew, Lifetimeâ€™s What Should You Do? and VH1â€™s Smokinâ€™ Hot Talk. Dr. Masterson has also performed a live C-Section on Discovery Live and she has been featured on the Style Network, BET and every major Los Angeles television station.

A resident of Southern California, Dr. Masterson is the proud mother of an 18-year-old son, Daniel, and in her spare time, she enjoys surfing and studying French.

2 Responses to About Dr. Masterson